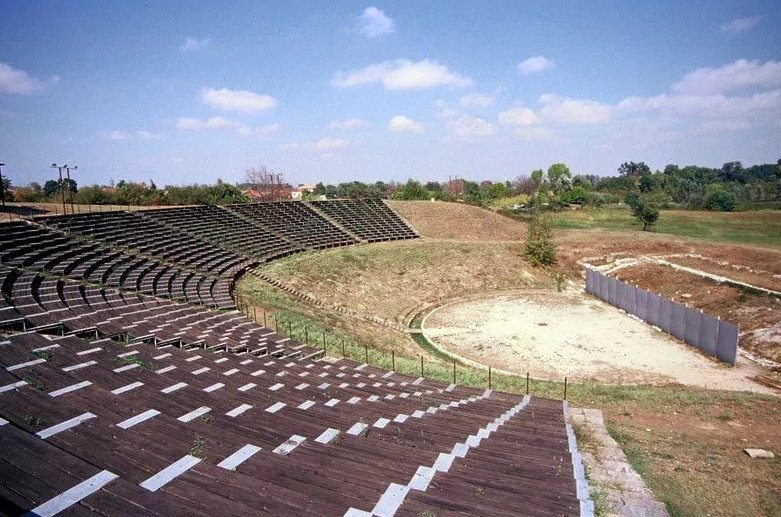 The architect of the monument, taking advantage of the morphology of the terrain, appropriately shaped the area with partial demolition and artificial overhanging, with the result that his work was an achievement of personal intervention and the most successful of his kind. The orchestra, with a diameter of about 26 m, is defined by an uncovered stone drainage duct and has a floor of pressed earth. On the axis of the theater and within the orchestra, an underground corridor with two chambers, one at each end, is certainly identified with the "joystick scale" of the ancients, the point, that is, where the actors depicting the faces of the Lower World appeared.

The hollow, without a retaining wall at its ends, formed on cobblestone slopes that faded smoothly on the lanes, had clay pots, a peculiarity not found in any other ancient theater. It should be noted that King Archelaos called Euripides, who spent the last years of his life in Macedonia, where he wrote the drama ARCHELAOS, as well as the BACHES.

It is almost certain that these performances went to the theater of Dion. Excavatory observations lead to the conclusion that the theater was abandoned after 168 BC, it operated impressively until the early imperial years and was probably totally obsolete with the erection of Roman theaters in the area.

In the last years in the ancient theater were placed wooden stands, with a capacity of about 4000 spectators and the events of the Olympus Festival take place every summer.

Information about the site

A sufficient number of parking spaces are available for free
Toilets at the entrance of the room and in the refreshment room of the archaeological park.
Viewers' positions are at the end of a 30 meter hill trail.
Improved mosquito protection.