At the shadow of Olympus 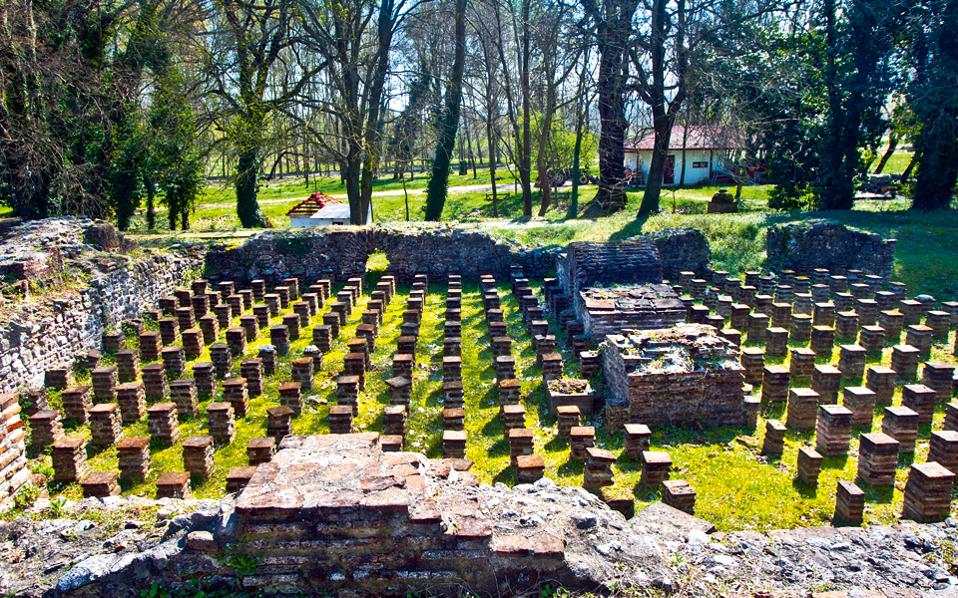 The archaeological site of Dion is situated on the north- eastern slopes of Olympus and 5km only from the coast. The ancient Dion, “the city of Zeus” the sacred city of ancient Macedonians, even if today ruins, gets across to the visitor admiration.

From the excavating findings comes up that Dion covers a continuous life of 1000 years, from the 5th century BC until 5th century AD.

According to ancient writers testimonies we are informed that the Macedonians gathered in Dion to honour with sacrifices and presents the Olympian Gods regularly.

"Dion- the most beautiful archaeological park in Greece "

Almighty Zeus Temple
It is about the most recent discovery (2006) and it is a magnificent construction with arcades, rooms and mosaic decoration. The full- length statue of Zeus- almost entire- is surrounded by pedestals with embossed eagles.
Dimitra and Isis sanctuaries
The first in one of the most ancient of the goddess in the northern greek field and identified from the finding of the related votive inscription. From the excavating findings, the one that stands out is the marble head of Dimitra (late 4th century BC). Provoking the sanctuary of Isis as the religious statue of Isis of Luck stands in front of the source of the holy water and nearby there is a small temple dedicated to the worship of Aphrodite, as well as a statue of Aphrodite Ipolimpidias (2nd century BC).
Ancient an Roman Theatre
The ancient theatre is situated out of the city walls, in the west part of Dimitras sanctuary and its construction dates in the Hellenistic times, probably during  king Phillip V reign. The Roman theatre was built during the 2nd century AD, probably in the time of Emperor Adrianos. The only statue that was saved was a headless statue of Hermes in a good condition.
The city of the dead of Dion
The place where all the dead were buried since the middle of the 5th century BC till the early of the 5th century AD: the embossed columns and the burial altars witness the care of the citizens for their dead. What stands out is the four impressive Macedonian Tombs which were discovered in 1929 and later.
Archaeological Museum
It is located in modern Dion, in a 500 meters distance from the archaeological park. The findings of the excavations are displayed in groups according to the place they were found: public buildings, homes, sanctuaries, cemeteries. It also hosts some findings from Ancient Pydna and other archaeological sites of Pieria, while you can find the educational exhibition “The daily life of Dion” in the basement.
Mediterranean Mosaic Center
This technique is taught to almost fifty students from all over Greece by special craftsmen every year, with subjects inspired from the mosaic from the archaeological park of Dion, while every summer both students and famous artists display their works in the venues of the center.
The gallery of Dion
It is located in the modern village and it is an innovative venue, where all the archaeological findings are displayed temporarily before the final storage or their transport to the museum. The visitors can see exactly how they came into light and realize the study procedure and preservation. 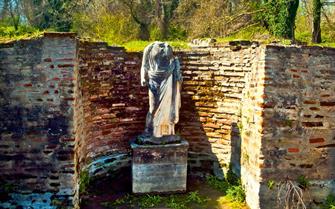 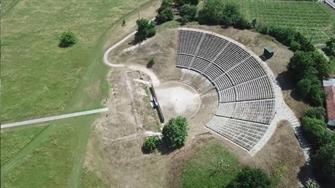 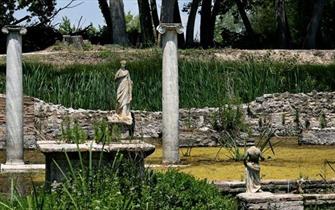 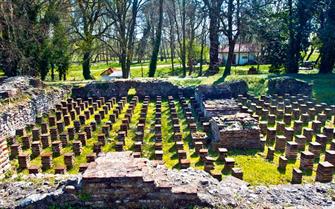